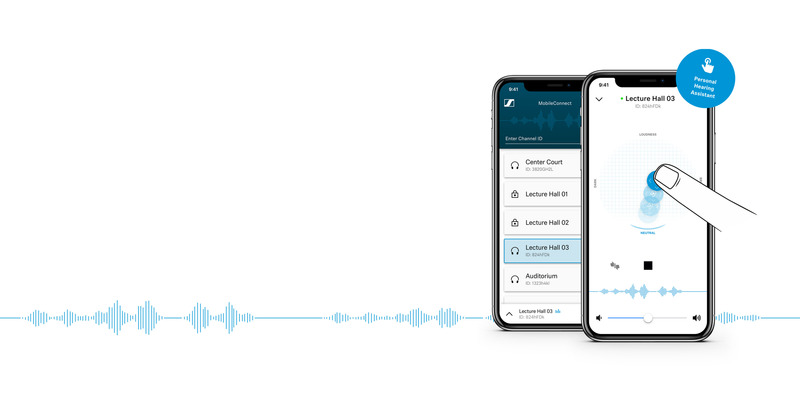 Sennheiser MobileConnect streams audio content via WiFi live and in superior quality to any mobile device of students and audiences.

The Personal Hearing Assistant enables users to perfectly adjust the audio signal to their individual hearing needs. The touchscreen control makes it easy and intuitive to use. The Hearing Assistant enhances speech intelligibility and offers superior sound quality.

MobileConnect integrates easily into existing network and audio infrastructures. Administration and setup of the entire system is made easy by the MobileConnect Manager.

Bring your own device

Students and audiences use their own device as the receiver. No additional hardware is needed. For users the familiar device is convenient to use. For operators there is no effort for device handling and maintenance. The Total Cost of Ownership is kept at a minimum.

The user can now access the channel over a Channel ID entry or by scanning a QR Code.

With MobileConnect, transmission of audio content over WiFi to all smartphones (iOS & Android) is possible.

The system is designed to be the Assistive Listening solution for the entire campus.

The MobileConnect Manager is the backend of the system. It is installed on an on-Premise server hardware. It offers a single point of administration for all MobileConnect Stations. All stations in the network will discover the manager and register automatically. The settings include channel configurations, audio inputs as well as the generation of QR codes.

The MobileConnect Staion supports up to 100 simultaneous clients.

One Device, many possibilities.

The ½ (half) 19-inch MobileConnect Station handles the audio. It can be installed anywhere in the network, whether it be a lecture hall, a central server, or a media room. Power over Ethernet minimizes the installation effort and makes the device predestined for use in a server rack. It features two XLR inputs and outputs, as well as Dante™ inputs.

The Mobile Connect app allows easy access to audio streams. Users simply choose the corresponding stream from the list or scan a QR code displayed in the room. The App can be downloaded for free from the App Store or Play Store.

MobileConnect for assistive listening deployed at the Royal Society of Medicine

During big events, conferences and lectures …

Stay tuned in to Sennheiser and enjoy a ...
Subscribe now